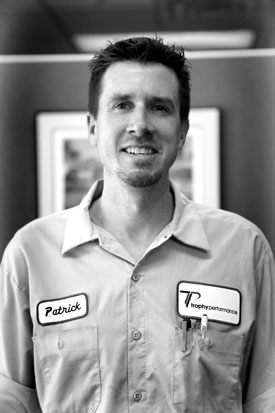 Growing up in the Las Vegas area, Patrick Molnar has seen this city change immensely. As a young teen, Patrick became interested in cars and electronics. By 19 he was a Clifford and Alpine Security certified installer.

With materials such as fiberglass, plexiglass, acrylic, steel and wood, Patrick has created several custom vehicles and sound systems over the years to their owners’ delights.

Patrick’s passion and expertise has given him the reputation as one of the best car audio and electronics installers in the Las Vegas area. Patrick managed several custom shops as well as owning his own for two and a half years.

Patrick has known Todd Trimble professionally since 1999. In 2013 Todd offered Patrick an opportunity to join the growing team at Trophy Performance where he could use his knowledge of vehicle electrical systems and Advanced Level MECP certification. Patrick is thrilled to be working in a first class reputable independent Porsche repair facility.